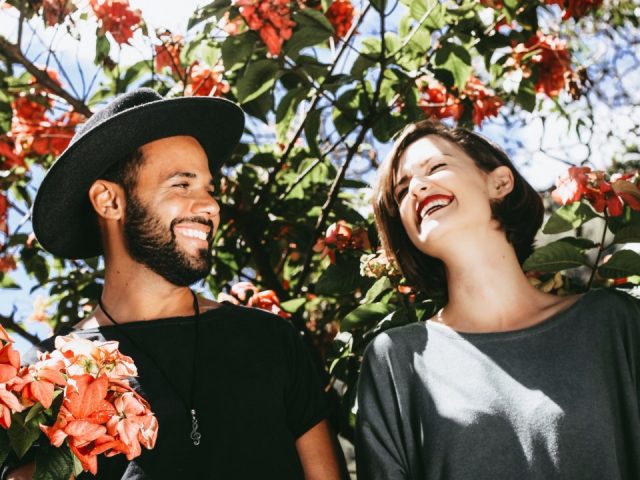 Being in a great relationship not only feels great, but studies have shown that is can actually improve your health! The team at Valenti matchmaking hopes you find this fun article by Kristin Salaky informative as it shows all the ways that being in a happy relationship can improve your life.

Being in love is not just good for when you need a wedding date.

There are tons of practical and emotional benefits to being in a healthy partnership, including having someone to hold your hand through the bad times and marathon your favorite show with you.

But having a good relationship can also have some profound effects on your physical well-being. Here are the biggest ways that being in love can put you in better health.

It can make you happier.

Being in a healthy and supportive relationship can actually have a big boost on your happiness level, according to several studies.

Being in love has a big effect on your oxytocin level, which promotes bonding and comfort. This is why you love being around your partner, and why just being near them can boost your mood.

It can help you to live longer.

It’s been a long-held theory that married people live longer than their single counterparts.

Although it’s had some studies to the contrary recently, other studies continue to show that being in a healthy relationship allows people to live a longer life.

But we can all probably agree the truth benefit of a healthy partnership is having someone you’re happy to spend those years with.

It can help you age more gracefully.

If you want to grow old, it helps to have someone to do it with.

A study by the University of Missouri Department of Human Development and Family Studies found that people who were in happy marriages actually rated their heath as higher, even in older age, than those who remained single or were in unhappy relationships.

It can reduce stress.

Despite the sitcom trope that marriage is a big source of headaches, a study found that married people are actually less stressed than their single counterparts.

A study from the University of Chicago suggested that people who are married or in committed relationship actually have lower levels of the stress hormone cortisol.

“These results suggest that single and unpaired individuals are more responsive to psychological stress than married individuals, a finding consistent with a growing body of evidence showing that marriage and social support can buffer against stress,” researchers wrote.

It can benefit your mental health.

A study based on the 2009 California Health Interview Survey found that couples, specifically same-sex couples, had less of a risk of mental illness than LGBTQ people who were single.

Researchers also said that the same is true for heterosexual couples.

“We know that heterosexual marriage provides a higher perception of social integration and support. It makes sense that same-sex marriages would carry some of the same benefits,” one researcher told ABC News at the time.

Although anyone, even those in the healthiest relationships, can suffer from mental illness, it’s good to know that the support of a loving partner can improve your mental health.

It can make you feel less pain.

A study suggested that when people are in “deeply in love” and look at a photo of the object of their affection, they actually feel less pain than those who don’t have anyone to look at romantically.

Researchers found that the dopamine system that is deployed when you’re in love can create its own form of natural pain killers, lessening the severity of pain.

It can prevent a heart attack.

People use the heart as a metaphor for love and affection, but it turns out that a good relationship can have a positive effect on your literal heart as well.

Researchers found that the reasons behind the results likely come from the fact that having a partner can encourage you to look after your overall health, and that married people have someone who would encourage them to go to the doctor.

It can help you sleep better.

Even if your partner is a blanket hog, you’ll probably still reaping some good sleep because of them.

Researchers at the University of Pittsburgh found that people who slept next to their significant other had lower levels of cortisol, when allowed them to sleep better. A separate study found that women in long-term-relationships slept more soundly and fell asleep more quickly.

It can help you heal faster.

A study found that happy couple who were administered small blisters actually healed more quickly than those who were blistered, yet single.

You can thank oxytocin and lower stress for that, researchers claim, because it can have a positive effect on healing.